John McCain, a war hero and towering figure in American politics, known for reaching across the aisle in an increasingly divided…

John McCain, a war hero and towering figure in American politics, known for reaching across the aisle in an increasingly divided nation, died Saturday following a battle with brain cancer. He was 81.

The senator’s passing marked the end of a storied, 35-year political career that brought the independent-minded Republican within reach of the White House as his party’s presidential nominee.

“It’s been quite a ride,” McCain, who was tortured during five years as a prisoner of war in Vietnam, wrote in a memoir published earlier this year.

“I’ve known great passions, seen amazing wonders, fought in a war and helped make peace. I made a small place for myself in the story of America and the history of my times.”

McCain, who had been receiving treatment in his home state of Arizona, was surrounded by his wife Cindy and his family during his final hours.

“He was a great fire who burned bright, and we lived in his light and warmth,” said Meghan McCain, one of the late senator’s seven children — three of them from a previous marriage. 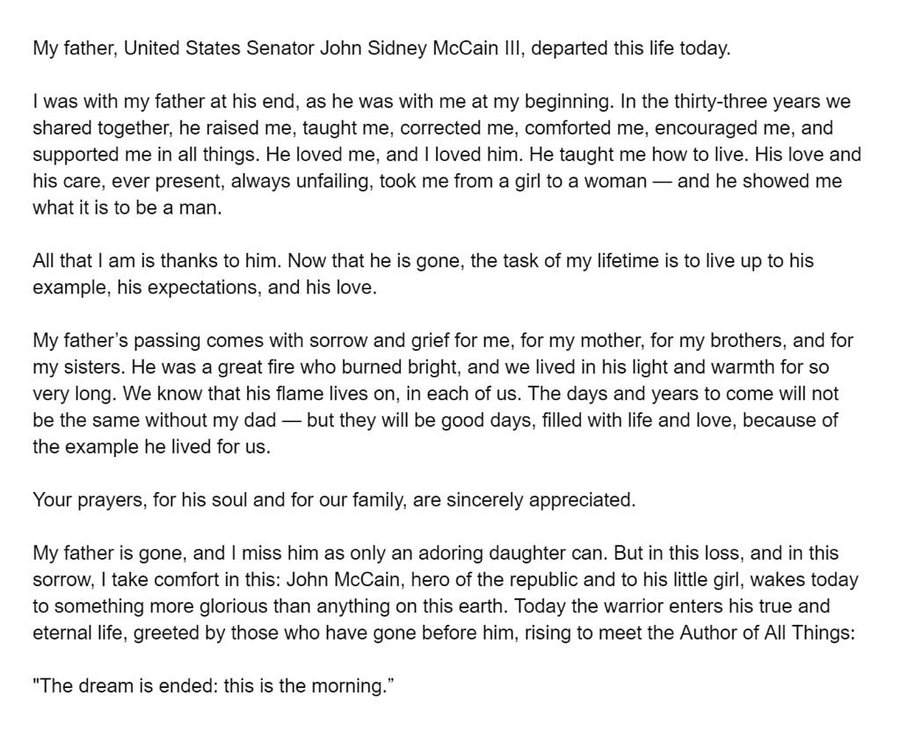 I love you forever – my beloved father @SenJohnMcCain

His wife, Cindy McCain, wrote that she had an incredible 38-year adventure with him. “He passed away, the way he lived, on his on terms,” her tweet said.

My heart is broken. I am so lucky to have lived the adventure of loving this incredible man for 38 years. He passed the way he lived, on his own terms, surrounded by the people he loved, in the the place he loved best.

Near the driveway to his ranch in a rural part of Sedona, Arizona, a sign read “Sen McCain, thank you for your service.”

A police escort accompanied the hearse that carried his body, as a fiery sunset cast its last light over the rustic countryside McCain loved dearly, and local residents came bearing flowers for the late political titan.

A steady stream of friends and colleagues had come to bid him farewell at his Arizona ranch in the months since his cancer diagnosis, in July 2017.

US President Donald Trump, who once mocked McCain’s war record, said he sent his “deepest sympathies and respect.”

My deepest sympathies and respect go out to the family of Senator John McCain. Our hearts and prayers are with you!

McCain had been a rare and outspoken Republican critic of Trump, accusing him of “naivete,” “egotism” and of sympathizing with autocrats. He made a decisive vote last year that killed Republican attempts to repeal Barack Obama’s health care reforms, and Trump never forgave him.

Encomiums and condolences from US presidents and political leaders greeted his death. 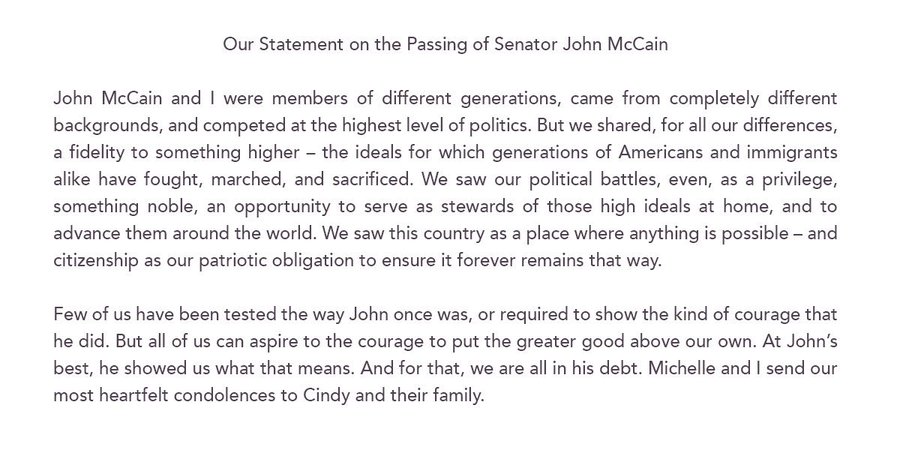 Our statement on the passing of Senator John McCain: 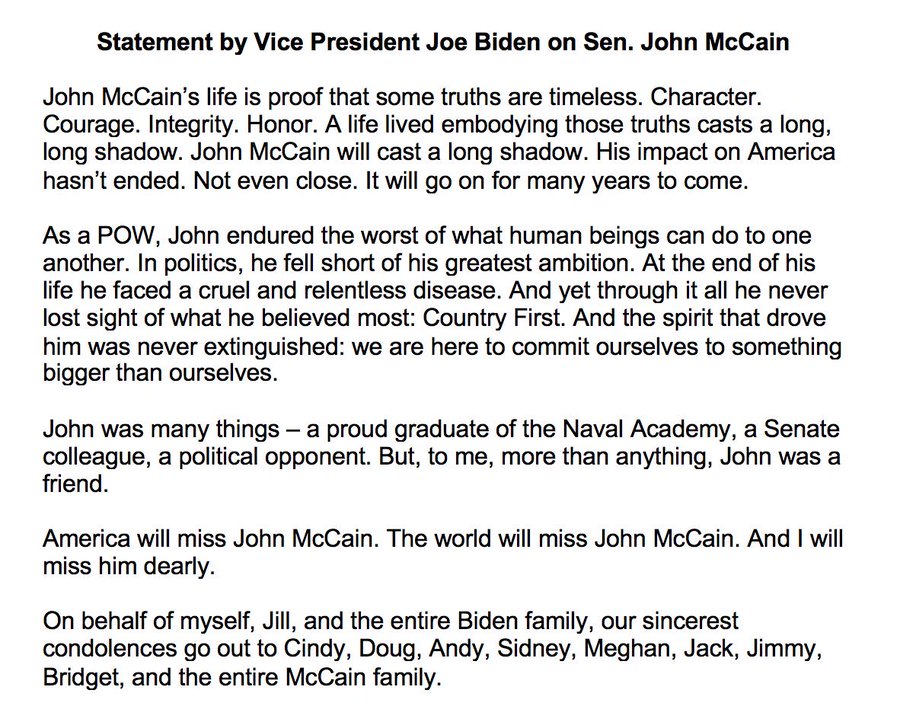 John McCain was many things – a proud graduate of the Naval Academy, a Senate colleague, a political opponent.

But, to me, more than anything, John was a friend. He will be missed dearly. 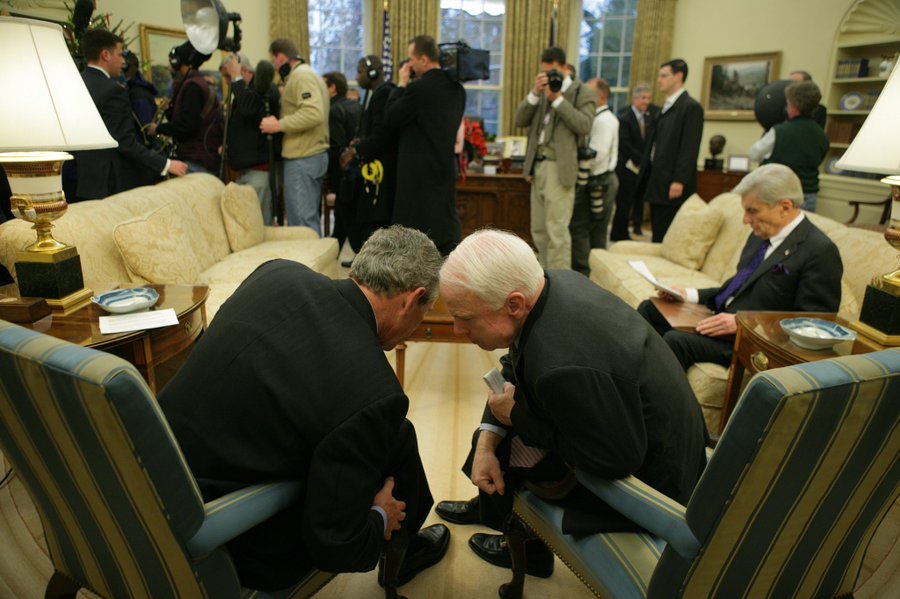 “Some lives are so vivid, it is difficult to imagine them ended. Some voices are so vibrant, it is hard to think of them stilled. John McCain was a man of deep conviction and a patriot of the highest order.” […] Full statement by President George W. Bush https://www.bushcenter.org/about-the-center/newsroom/press-releases/2018/08/gwb–statement-mccain.html …

Words cannot express the sorrow I feel at John McCain’s passing. The world has lost a hero and a statesman. Cindy and the McCain family have lost a loving husband and father. I have lost a wonderful friend. 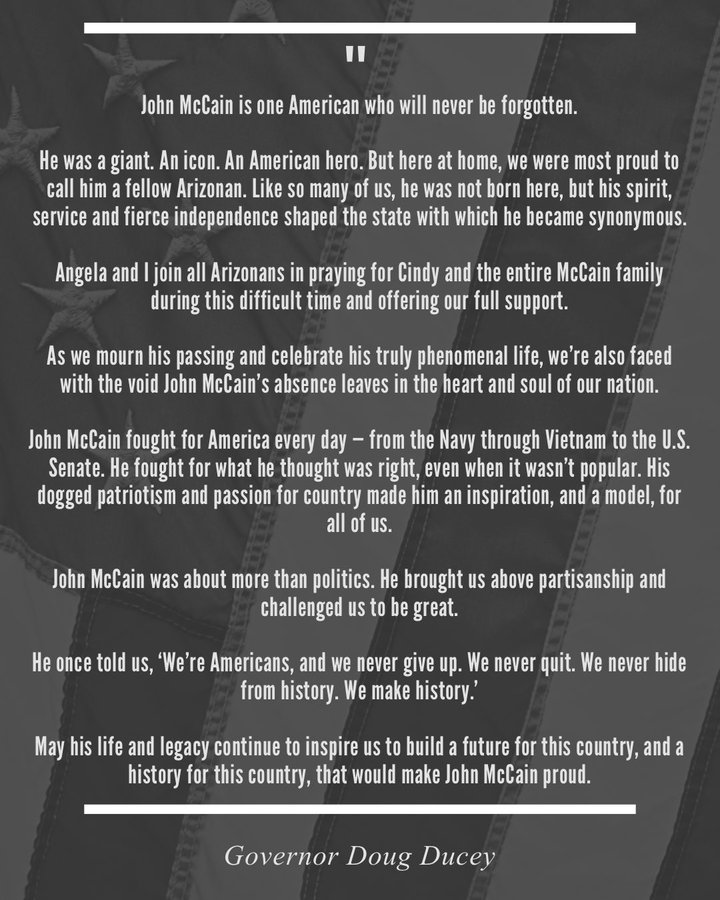 A giant. An icon. An American hero. God bless @SenJohnMcCain. He will never be forgotten.

My full statement on the life of an incredible man we were blessed to call a fellow Arizonan: 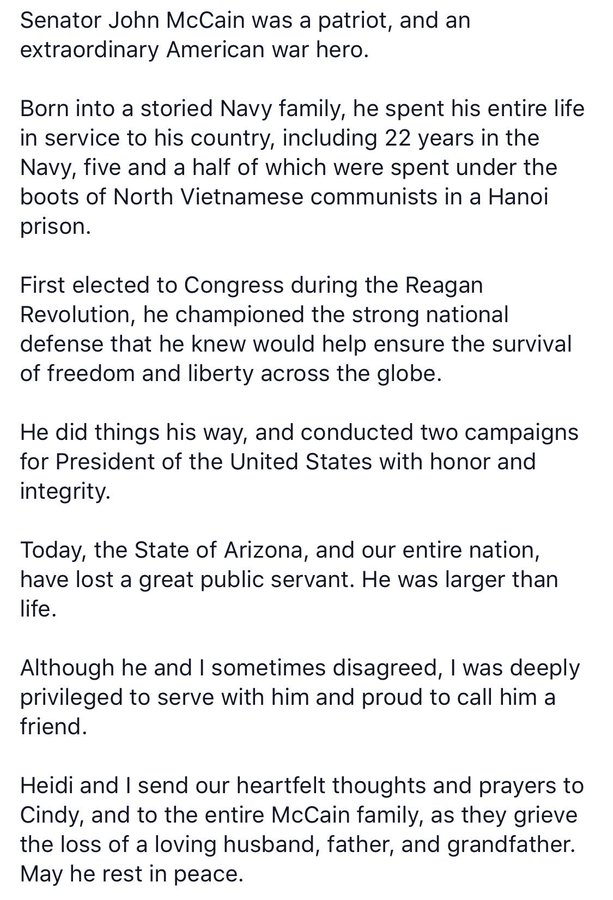