WASHINGTON (AP) — Rep. Pramila Jayapal (D-WA) among the 575 people who were arrested at a Senate office building while…

WASHINGTON (AP) — Rep. Pramila Jayapal (D-WA) among the 575 people who were arrested at a Senate office building while protesting the Trump administration’s policy on illegal border crossings and call for the reunification of families who had been separated.

In a statement released by U.S. Capitol Police, law enforcement officials said the protesters were “unlawfully demonstrating.” They are being charged with crowding, obstructing or incommoding.

Police say those who were arrested were processed on the scene and released. Individuals who want to pay their fines can do so 24 hours after their arrest.

Jayapal says she and other protesters were “here to fight for our families to be free, to fight for the ability of our kids to be with their parents — not in cages, not in prison, but able to live their lives free, safe and secure.”

Many protesters in the atrium of the Hart Senate Office Building wore foil blankets similar to those given to migrants housed at U.S. detention facilities.

Protesters loudly chanted “What do we want? Free families” and “This is what democracy looks like.” 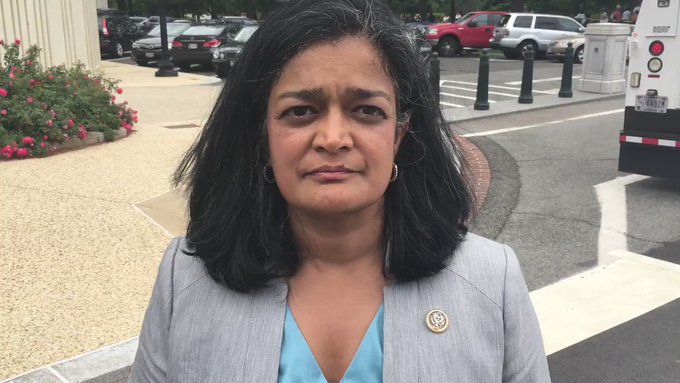 Democratic Sens. Jeff Merkley of Oregon and Kirsten Gillibrand of New York joined the protesters. At one point, Merkley donned a foil sheet as he gave a TV interview.

Winnie Wong, political adviser for the liberal National Women’s March, says the protest demonstrates “the energy we will need to see to at the ballot box in November.”