Kofi Annan, the former United Nations secretary general, has died at the age of 80, the UN announced on Saturday, August 18,…

Kofi Annan, the former United Nations secretary general, has died at the age of 80, the UN announced on Saturday, August 18, 2018.

The Ghanaian was the seventh secretary general of the UN between 1997 and 2006 and won the Nobel peace prize for his humanitarian work.

Annan, one of the world’s most celebrated diplomats and a charismatic symbol of the United Nations who rose through its ranks to become the first black African secretary-general, has died aged 80. He was the first to emerge from the ranks of United Nations staff.

Annan spent virtually his entire career as an administrator in the United Nations.

He served two terms as secretary-general from January 1, 1997 to December 31, 2006, capped nearly midway when he and the UN were jointly awarded the Nobel Peace Prize in 2001.

During his tenure, Annan presided over some of the worst failures and scandals at the world body, one of its most turbulent periods since its founding in 1945.

His foundation also announced his death in a tweet, saying that he died after a short unspecified illness. 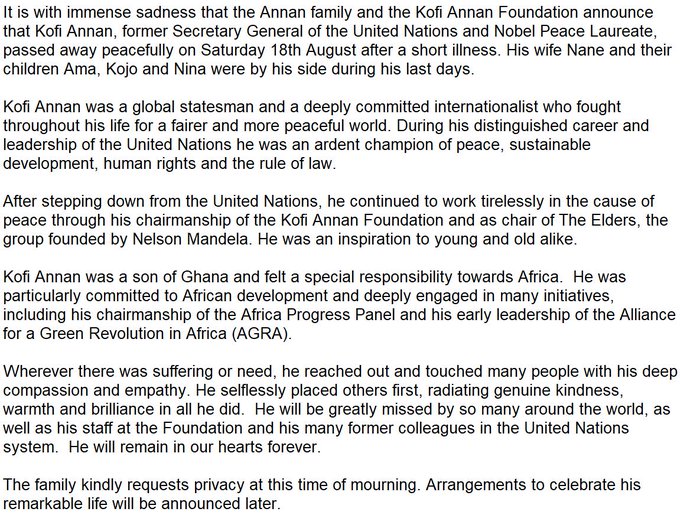 Born in Kumasi, Ghana on 8 April 1938, he was fluent in English, French and several African languages.

He is survived by his wife, Nane and their three children.