Like Loading...
Unkempt from a 12-week training camp, with half-beard and longer-than-usual crop of hair, Joshua proclaimed himself the No 1 in the division.

After a full 45-minute sweatshop workout at the English Institute of Sport, Sheffield, in front of the flashing cameras, sponsors, and PR gurus purveying his every move, Joshua dismissed the notion that any other had the right to claim himself as the leading heavyweight in the world.

The fist on the desk with a thud was a comment aimed roundly at Tyson Fury, who is scheduled to face the other belt holder, the unbeaten American Deontay Wilder, next, most likely in Las Vegas in early December.

© Getty Images Tyson Fury believes he is the top dog in heavyweight boxing Fury has trumpeted, since his return, that as the unbeaten fighter who beat Wladimir Klitschko, he remains the “lineal” heavyweight champion.

Joshua, 28, undefeated in 21 fights, scoffed at the words. “No. I am No 1,” he said. “Name me a fighter that has a better record than me after 22 fights [Povetkin will be his 22nd]. I ain’t got to show anything. History will tell you. History is all that matters. I will prove myself. Ever since the amateurs, non-stop I have been on top of my game.

“I was watching a Wladimir Klitschko fight the other day and he had time to learn. I’ve been in at the deep end time and again. If people aren’t satisfied with it now, they never will be. Look at Floyd Mayweather. They are never happy with him and he is one of the greatest of all time. They said the same of Lennox Lewis, now he is looked back on as a slick operator.”

Eddie Hearn, Joshua’s promoter, chipped in: “It’s nonsense to say Fury is still the lineal champion. The man who beat the man but then failed a drugs test and then went out for two years and has done nothing.”

“Charles Martin [the International Boxing Federation champion] called me out, he wanted to fight me. So I stepped up and fought. Klitschko wanted to fight, I fought [for the World Boxing Association title]. 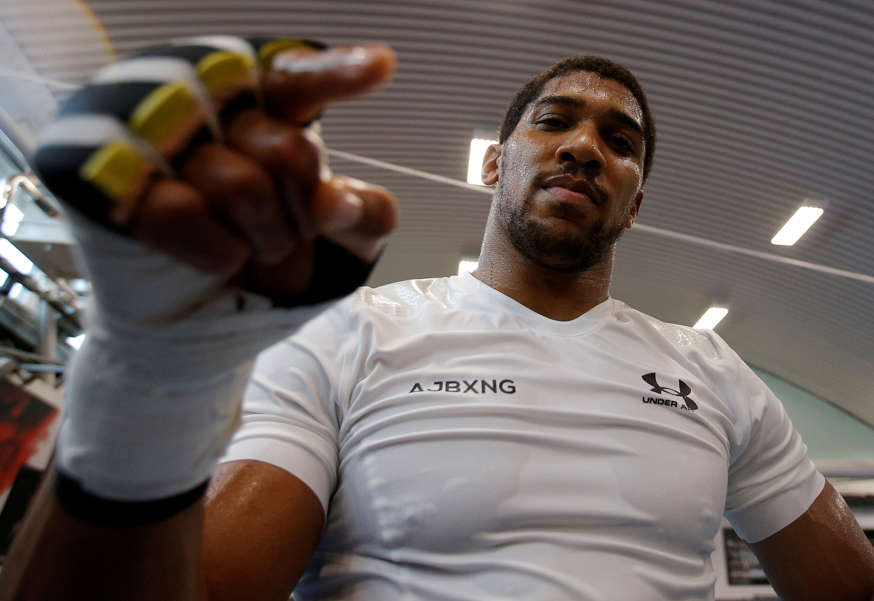 © Reuters Boxing – Anthony Joshua Media Day – English Institute of Sport, Sheffield, Britain – September 12, 2018 Anthony Joshua poses for a photograph Action Images via Reuters/Andrew Couldridge TPX IMAGES OF THE DAY “Me and Wilder had been negotiating for a long time after the [Carlos] Takam fight and it fell through. Wembley Stadium is booked again for April, God willing, I beat Povetkin, and hopefully me fighting [the winner of Fury-Wilder] is quite straightforward.

“At the moment, it is like a power struggle in the heavyweight division. Good luck to Fury, Wilder and myself. But when all’s said and done, I won’t be that geezer in the pub telling war stories about ‘I was the lineal champ’.

“I am not that type of geezer. I am focused on my own career and where I am going.”

One loss Joshua could not avoid in the past week was his Range Rover, stolen on Wednesday night. “It’s a beautiful car but these things happen. It’s an epidemic right now in London, people getting robbed of material things and cars. But it just teaches you to be understated. It had a pair of trainers and some dirty laundry. It’ll probably be stripped down and in another country by now. An African president could be cruising around in my Range Rover,” he joked. Serious faces now though, until fight night in front of 80,000 at Wembley.